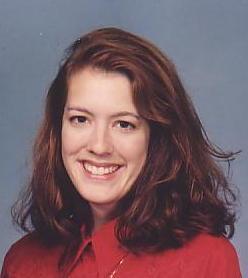 Amy Sutherland Kimball, 38, passed away on Saturday November 6, 2004. A resident of Easton, Conn., Amy will be remembered for her kindness and incredibly courageous battle against cancer. Born in Boston, Mass. on October 13, 1966, Amy grew up in Reading, Mass. and later moved to Salt Lake City, Utah where she was actively involved at Skyline High School. In 1988, she earned a Bachelor of Science in Accounting from Babson College in Boston, where she met her husband, Jeff. After college, she began work as an auditor for a large accounting firm in Boston and earned her CPA. She then moved to Washington, D.C. where she earned an MBA from Georgetown University in 1993. Always interested in helping others, she parlayed her knowledge of finance to the benefit of others by working for the National Headquarters of the American Red Cross in Washington for many years after leaving Georgetown. She married her husband in 1995 and moved to Connecticut in 1997, where she began work with Yale University School of Medicine. Most recently, she served as CFO for the familys commercial real estate firm, The Kimball Group. Her greatest joys in life came with the birth of her older daughter Alexa in 1999 and her younger daughter Elyse in 2001. Amy was a devout family member who loved sewing and making crafts.

She is survived by her husband Jeff and her two daughters Alexa and Elyse of Easton; her parents, Arthur A. and Marian L. Sutherland of Salt Lake City; her sister Laurie Sutherland and brother-in-law Theodoros Papalimberis of Falmouth Maine; her mother-in-law June Kimball of Trumbull as well as a large extended family and 11 nieces and nephews.

Funeral services will take place on Thursday November 11, 2004 at 9 a.m. from the Abriola Parkview Funeral Home, 419 White Plains Road, Trumbull, and at 10 a.m. in Salem Lutheran Church, 3160 Park Avenue, Bridgeport, Conn. Interment will be private at the convenience of the family. To light a virtual candle or gather more information please visit us at www.abriola.com. Friends may call on Wednesday, November 10, 2004 from 4 p.m. to 8 p.m.

In lieu of flowers, the family asks that contributions be made to the Amy Kimball Memorial Fund, c/o Webster Bank, 2 Daniels Farm Road, Trumbull, CT 06611, Attention: Michelle Izzo. All proceeds from the fund will be directed to research cancers of the central nervous system and programs that support health care providers like the extraordinary nurses and doctors who cared for Amy.

Share Your Memory of
Amy
Upload Your Memory View All Memories
Be the first to upload a memory!
Share A Memory