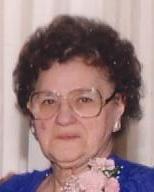 Mary Valko Ryan, known to her family and friends as Mae, passed away peacefully with her family by her side on Saturday, May 1, 2004. The daughter of the late John and Ilona (Elsie) Fechik Valko, she was born October 13, 1918 in Bridgeport CT. Mary was one of ten children. She is survived by her sister Elizabeth (Betty) Alessie of Stratford and her brother Andrew Valko of Florida. She is predeceased by her other siblings William (Wally) Valko, Michael (Micky) Valko, Joseph Valko, John Valko, Albert Valko, Cecilia (Sally) Augustine and Ann Barbaras.

A devoted wife and mother, Mary was married for 63 years to the late Daniel J Ryan Sr. and is survived by two children: her daughter, Arlene and Michael Saranich with whom Mary lived with in Stratford; and her son, Daniel and Shirley Ryan also of Stratford.

A retired inspector for Remington Arms, she belonged to the quarter of century club. Mary had a passion for cooking, crocheting and dancing. She was also a dedicated fan of the Mets. Mary has six grandsons and one granddaughter who are Mark Ryan of Stratford; James Ryan of Milford; SFC/Drill Sgt. Scott and Amy Ryan of Maryland; SPEC Shawn and Sgt. Jeanie Ryan currently stationed in South Korea; Kevin and Anne Marie Saranich of Stratford; Kenneth and Tara Saranich of Stratford; and Kristine and Christopher Carroll of Fairfield. In addition, she also survived by ten great-grandchildren who affectionately referred to her as Cha Cha Cha. They are Jessica and Faye Ryan, Shawn Patrick Ryan Jr., Robert and Nicholas Wil, Shannon and Kara Saranich, Daniel and Liam Saranich and Grace Ryan Carroll.

Funeral services will take place on Wednesday, May 5, 2004 at 9 a.m. from the Abriola Parkview Funeral Home, 419 White Plains Road, Trumbull, and at 10 a.m. in Holy Name of Jesus Church, Stratford for a Mass of Christian Burial. Interment will follow in St. Michael Cemetery, Stratford. Friends may call on Tuesday from 4-8 p.m.

Share Your Memory of
Mary
Upload Your Memory View All Memories
Be the first to upload a memory!