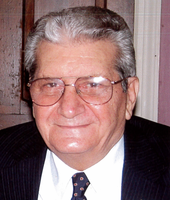 Amerigo Ricci, age 94, of Trumbull, passed away peacefully on Sunday, November 20, 2022 at St. Vincent's Medical Center with his loving family by his side. He was the beloved husband of 67 years to the late Erminia (Iona) Ricci. Born in Santopadre, Province of Frosinone, Italy on November 11, 1928, he was a son of the late Angelo and Angela (Capuano) Ricci and was a longtime resident of Trumbull.

As a young man, he immigrated to the United States from Italy and settled in Bronx, New York. He was soon joined by his wife, Erminia, and infant son, Vincenzo (Vincent), and began working in the garment district in New York City. A short time later, his twin sons, Angelo and Peter were born. Through the years, Amerigo worked his way within the men's garment industry in New York City and New Jersey and held various positions as a garment finishing pressman, quality-control foreman, and final production manager. He lived with his family in Mt. Vernon, NY for many years, then in Stamford, CT, eventually, settling with his wife in Trumbull, CT.

Amerigo enjoyed spending time with family and friends, playing bocce ball at family gatherings, watching international soccer and golf on TV, as well as attending local soccer games in Trumbull that his grandsons' played in when they were younger. He always enjoyed a good home-cooked meal, had a notorious appetite (especially loved his pasta, figs, chestnuts, filet mignon, tripe, and baccala), and loved going to the casino and also loved playing friendly games of poker with family and friends, which he continued doing until very recently, with his buddies (Tony G., Tony D., and friends). Special thanks to good friends and neighbors, Dora M., Walter, Agnes and Jim H., and Tony G., for the many years of shared friendships, along with the other neighbors and friends in town. Amerigo and Erminia were devoted parishioners of St. Theresa's in Trumbull and had previously dedicated many hours to the Eucharist Adoration program.

Survivors include his beloved sons, Angelo Ricci and his wife, Donna, of Trumbull, and Peter Ricci and his wife, Camille, of Westtown, NY, eight beautiful grandchildren, Christine (Michael), Jen (Rob), Amanda (Randy), Rachele (Dean), Michael (Ally), Jeremy, Vincent, and Ryan, as well as having been blessed with nine precious great-grandchildren, Gianna, Joseph, Dylan, Brienna, Carrina, Alexis, Isabella, Vivian, and Mia. Amerigo is also survived by his 97-year-old sister, Gilda, in Italy, a loving sister-in-law, Dora Ricci, along with many nephews and nieces. He was predeceased by a son, Vincent, a daughter-in-law, Elsie, a brother, Guido, and a sister, Agata.

The Ricci family wishes to extend their gratitude and deep appreciation to Dora T. for the loving, compassionate, and personal care provided to him and his wife during the last couple of years -- truly an angel. The family also wishes to express their gratitude to the doctors, nurses, and medical team at St. Vincent's Medical Center for the attention and care provided to him during his recent stay.

All are invited to attend a Mass of Christian Burial on Monday, November 28, 2022 at 12:00 p.m. in St. Theresa Church, 5301 Main Street, Trumbull. Entombment will follow in the St. Monica Mausoleum at Gate of Heaven Cemetery, Trumbull. Friends may greet the family on Monday morning from 10:30 a.m. to 11:30 a.m. at the Abriola Parkview Funeral Home, 419 White Plains Road, Trumbull.

In lieu of flowers, contributions in his memory may be made to St. Jude Children's Research Hospital, https://www.stjude.org