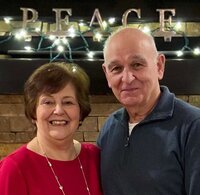 James Tamborra and his wife Barbara (Rich) Tamborra, both age 81 of Shelton, passed away suddenly after injuries they sustained from being struck by a motor vehicle on Friday, December 10, 2021.

James Tamborra was born in Mount Vernon, NY on January 29, 1940. He was a son of the late Nicholas and Maria (DeNicolo) Tamborra. James was a proud U.S. Air Force Veteran.  An engineer by trade, he began his working career at Burndy Corporation and later served as Vice President of Engineering at Emson Research. James enjoyed gardening and his passion for aeronautics led to his love for model airplanes. James served at the Merton House and volunteered countless hours building many lasting friendships.  He enjoyed spending time with his friends at the American Legion and the Catholic War Veterans.  A loving and devoted husband, father, grandfather, great grandfather, brother, uncle, and friend of many. He will be deeply missed by all who knew and loved him.

Barbara Tamborra was born in Bridgeport on October 31, 1940, she was the daughter of the late Robert and Antonetta (Camerota) Rich. Throughout her years, Barbara worked as a beautician, a St. Joseph’s High School administrative assistant, and worked on two medical offices over the years. Barbara was very outgoing, she enjoyed spending time with her friends and various social events.  She was a woman of great faith and served as a Eucharistic Minister at St. Lawrence church for over 20 years.  Barbara was a loving and devoted wife, mother, grandmother, great grandmother, sister, aunt, and friend of many. She will be deeply missed by all who knew and loved her.

James and Barbara enjoyed different interest; however, they were devoted and committed to one another and married for 57 years.  They were a very active couple who enjoyed numerous activities together.  James and Barbara were loving and caring parents who enjoyed hosting family holidays and get togethers, vacationing and spending time with their children and grandchildren.

Survivors include their loving children, Kenneth Tamborra and his wife Dana of Bethlehem, CT, Lynda Pisacreta and her husband Michael, Steven Tamborra and his wife Stacy, all of Marietta, GA, their cherished grandchildren, Anthony, Joseph, Nicole and Maxwell Tamborra, Gabrielle and Michael Pisacreta and Malayna, Payton and Austin Tamborra, their adored great grandchildren, Jack and Nico. Also surviving are James’ sister, Anna Olson and her husband Ed of Shelton and his sister-in-law, Gail Tamborra of St. Augustine, FL, as well as Barbara’s brother, Norman Rich and his wife Barbara of Shelton, CT and numerous cousins, nieces and nephews. James was predeceased by his brother, Jack Tamborra.